In this report, you are going to read about the reasons for eruptions and climate changes, how natural climate change occurs from eruption, the influences on land and air caused by these things, the long-time effects, and how an eruption will affect North Europe.

Why eruption and climate change happen 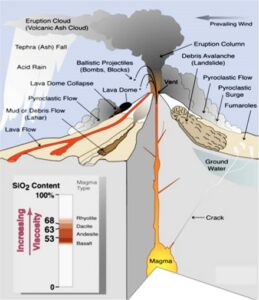 Volcanoes erupt when melted rock called “magma” rises to the surface and the pressure becomes too high inside the crater on the separation point of the lithospheric plates. Volcanoes also erupt when the plates separate and lava flows out, this is however more typical in Iceland as Iceland is located right on the North America plate and the European plate. Vulcanic eruptions releases substances such as water vapor H2O, carbon dioxide CO2, and sulphate which is known to reflect the solar waves.

Because of the sulphate the average temperature gets lowered drastically. However, these changes are only temporary and will disappear after a while. This makes the temperature go back to normal. Because of this, this is not a good solution for solving the climate changes, but it should be taken into consideration.

Influences on land and air

When a volcanic eruption happens, it can affect many aspects such as the animals and the life quality of people. An example is during the Mother hardship period in “1783-1785” in Iceland, when 75% percent of their livestock and about 10.000 people or 1/5 of the nation died because the eruption caused ash fall, frost, pollution, and with all that the animals and plants died which caused hunger amongst the people and they died. Another example is when the volcano Eyjafjallajökull erupted in 2010. The air traffic was stopped in most parts of Europe including Finland and Norway because of the volcanic ash. 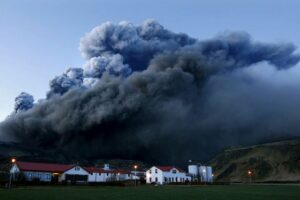 The effects of the volcanic eruptions do not last too long and will eventually disappear. As mentioned earlier, the temperature will decrease and a great example is when the temperature sunk between 0,1 and 0,4 degrees, when the volcano “Mount Agung” in Indonesia had an eruption in 1963. Even though the effects mostly seem positive due to increasing lower temperature, our ecosystem, and our society, they will not solve our climate problems. Using them in calculations and future predictions of the climate is definitely a good idea though. 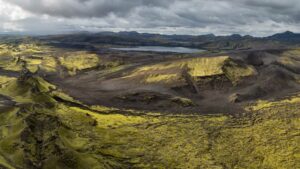 Laki is a volcano in Iceland. Laki is in the western part of the Vatnajökull national park and you could say roughly in the middle of the island. The whole area is usually called Lakagígar, which is the whole volcano belt so to speak when Laki is the main mountain that the fissure bisects. This volcano erupted on 8th June 1783 and introducing Icelanders to the biggest eruption int the history of Iceland.  Like we said the eruption was so severe that it killed about 25% of the people and 50-80% of the livestock. The affects were not only severe in Iceland but cause a havoc all over the world because of the 42 billion tons of basalt lava and clouds of hydrofluoric acid and sulphur dioxide that burst into the air.

How can an eruption affect North Europe?

Take the Laki eruption as an example. When this volcano on Iceland had an outbreak in 1783, a big part of North Europe was covered in a deadly gas and only the sun could shine through, but it only looked like a pale ghost on the sky.

The volcano released many million tons of sulphur dioxide, and as the wind carried it across Europe. The sulphur dioxide also reacted with the water in the atmosphere and formed acid rain that ruined vegetation and crops throughout Europe. The following winter was one of the coldest winters Europe had ever experienced.

The humans and animals died like flies (literally). The eruption led to the death of about 50-80% percent of cows, sheep and horses because of fluorine-intoxicated grass. The acid rain caused failed crops, which led to widespread famine, and about 25% percent of the population died.

The gas clouds also caused falling temperatures for all over the globe, but mostly failed crops throughout Europe. Due to these climate changes caused by the volcano, the following years had such an extensive famine that it had political consequences and were the primary cause of the French Revolution in 1789.

Nowadays there are no volcanoes in Finland. Ancient super volcano existed 1900 million years ago, and you can still find magma stones that were formed during the eruptions. Some of Iceland’s eruptions through time have certainly affected Finland mostly by air pollution and air traffic delays.