How does landslides, coastal erosion and climate change affect us? 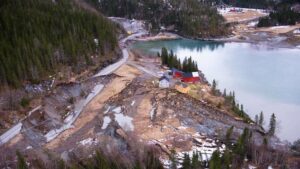 Landslide in the eastern part of the Trollfjell Geopark in Norway 2016.

Landslides cause damage to buildings, buildings close to a slope or a hillside have the risk of getting buried in a landslide, coastal erosion causes land near the coastline to sink and climate change can cause more rainfall especially in Norway and this could lead to water getting stuck and water erosion happens.

Coastal erosion is a healthy and natural event for the ecosystem, but people have speed it up by their own actions. Coastal erosion happens with ocean streams, water streams and is the loss of land around the coast

Climate change affects us in many ways. In Norway, we do not notice so many changes. The small changes we notice is that the winter is shorter and warmer. It snows less and the spring is longer. The main reason for climate changes is increased amount of CO2 in the atmosphere.

Why does landslides, coastal erosion and climate change happen?

Landslides can be initiated in slopes already on the verge of movement by rainfall, snowmelt, changes in water level, stream erosion, changes in groundwater, earthquakes, volcanic activity, disturbance by human activities, or any combination of these factors.

Influence on the country (land and people) 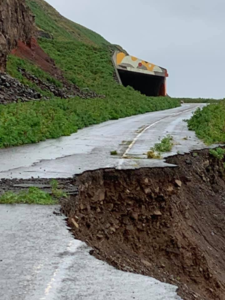 Houses and buildings can be damaged.

People can die or get hurt.

The land can be destroyed.

Yes, people around the areas with many landslides are more aware of more frequent landslides. They know what to do if they come in a situation where a landslide has happened or when there is a high risk of landslides.

How do they react to landslides?

Many people panic when a landslide happens. It is mostly because it’s something new and dangerous. People who have experienced landslides before will probably be calmer.

What can we do to prevent landslides? 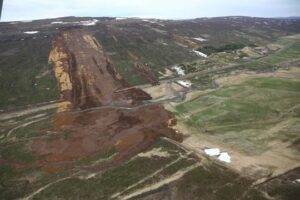 Landslide in north of Iceland 2013.

We need to reduce CO2 to prevent landslides. Carbon dioxide is a fossil fuel that has a detrimental effect on the earth. To reduce carbon dioxide in the air we must plant some trees. Trees photosynthesize and give us oxygen.

Make everyone in the nearby area aware of the dangers of landslides. Make sure that the water’s flow does not get stuck because that will build up pressure and water erosion happen. Have insurance.

What can we do if a landslide happens?

Landslides can occur all year around. Sometimes ravines or mountain slopes can be very unstable and only need little rain or heat waves to trigger a landslide.

Why – how – influences on the country (both land and people) – are people aware of more frequent landslides – and how do they react?