Why – how – influences on the country (both land and people)

Glaciers can be found in the areas of snowfall where the conditions are cold enough to allow the snow to lie until it has frozen to ice. Based on climate conditions and snowfall levels, we can see many remnants of the last ice age. Moreover, frozen peaks covered over 30 per cent of all land in the last Ice Age. The frozen spectacles are declining. Right now, these thick ice blocks can be found on 15 million square kilometres on our planet. Unfortunately, if our human activity continues to increase global temperatures, the glaciers will revert to water at a faster rate than they would naturally.

Since glaciers are formed through hundreds and thousands of years, they can be used in research. Today, we have an opportunity to see a long-term climate record by taking ice cores from the glaciers, which is very interesting for scientist. Because of this, scientists can get year-by-year information about past climate. Using the cores, gives them information that there have been several ice ages.

In earlier decades, we did not understand that the production of electricity using coal and petroleum affects our environment in a negative way. Other negative effects are uses of fossil fuels in transportation and industry. The human activity in the past 200 years has increased the amount of carbon dioxide in the atmosphere by 40 per cent. Greenhouse gases are the cause of most of the climate warming and glacier retreat in the past 50 years. Furthermore, farming, dust and soot from grazing and burning of fossil fuels are also causing glacier retreat.

Increased melting of the glaciers will cause rising in the sea level. Countries such as the Netherlands and Denmark will go under water, because their land is very flat. In Norway, Iceland and Finland we don’t have the same problem. We are already high up and when the sea level rises the country will also rise, so it takes longer time to go under.

Only less than 15% of the Norwegian glacier area has been monitored for mass balance and most often only for less than 10 years. Engelhardt and others have estimated the mass balance of Norwegian glaciers by modelling the situation using temperature and precipitation observations. Based on the modelling results, the winter ice mass of the glaciers increased between 1961 and 2000. Since then, both winter and summer ice masses have decreased significantly. The annual ice mass has decreased since 2000. In the four decades preceding this, the annual residual mass either remained the same or increased.

In Iceland, glaciers are particularly vulnerable to climate change. Most of Iceland’s glaciers have retreated since 1990 and almost all since 1995. Bradwell and others have evaluated the retreat history of the Virkisjökull – Falljökull glacier using measurements and photographs. Based on the results of the study, the glacier retreated faster between 1935 and 1945 than between 1990 and 2004. However, since 2005, the rate of retreat of the glacier has increased significantly. Speed of the retreats have averaged 35 meters per year since 2005. In the last five years, the glacier has retreated faster (about 190 meters in five years) than ever since measurements began in 1932.

Finland does not have glaciers. The last Ice Age has shaped the landscape of Finland. Eskers, kettles and the erratics of Rokua and Manamansalo were shaped during the Ice Age. There are many other traces of the Ice Age in Finland, e.g. potholes, morainic landforms, hummocky moraines, end moraines and whalebacks. The pictures below by Mikko Kiuttu from Finland.

When people first got settled in Iceland the glaciers were even smaller than today. Their advance during the Little Ice Age (1450 -1900) and former size can be traced from the glacial moraines of known age. Its known by data from lake sediments and descriptions written historical accounts. The glaciers reached far out onto the lowland, especially during the 17th and 18th centuries. At the beginning of the 19th century the glaciers started slightly retreating and then re-advanced. Around 1890 nearly all of them had reached their maximum size in historical times. We have information provided by local accounts and writings of naturalists and travellers about the extent of the outlet glaciers at their most advanced position. Descriptions of damaged pastures, hayfields and houses due to glacial rivers and advancing glaciers, along with difficult access to grazing areas, are prominent in the written records.

Since the end of the 19th century the glaciers have been changing. After 1890, most glaciers began to retreat. They receded fast in the 1930s and 1940s, and continued retreating, more slowly, until the 1960s, after which the rate of retreat slowed further. In the 1970-80s some of the glaciers re-advanced or remained stationary. The outlet glaciers from Skaftafell to Höfn have retreated 1-8 km, since the end of the 19th century until 2017. For example, in 2002 people could walk straight onto Skaftafellsjökul, a glacier in Skaftafell, but now from the same place it is not possible because of how much the glacier has retreated and has melted into a lagoon in front of the glacier. Altogether, they have lost an area of 340 km2 (equal to the Reykjavík capital region) and 20% of their volume. The ice loss is equal to 14 billion truckloads of ice and corresponds to a 0,3 mm rise in global sea level. 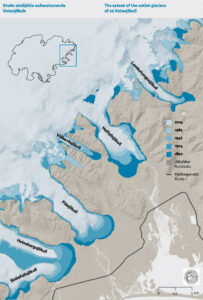 Map showing the southern outlet glaciers of Vatnajökull ice cap and their extent from ca. 1890 to 2010. Source: Hannesdóttir et al. (2015a).

Since the year 200, the glaciers have retreated exceptionally fast. The mass loss per unit area is among the highest in the world. Individual glaciers have lost 15-50% of their ice volume during this period. The glaciers will continue to melt and retreat and could lose half of their volume by 2100. After 200 years, only small ice caps will remain on the highest mountains. The same fate awaits other glaciers in Iceland and elsewhere outside the polar regions.

Glaciers in Iceland contain about 3500 km3 of ice, which if the glaciers would melt it would raise global sea level by 1 cm. In recent years the Greenland ice sheer has lost twice the amount of ice annually that the SE outlet glaciers of Vatnajökull lost in total since 1890. The meltwater from the glaciers in Greenland and Antarctica is the main cause of the global sea level rise, and it amounts to 3-4 mm per tear on average.

As ice caps in Vatnajökull thins and retreats, underlying crust rebounds at an accelerating rate, this rate of uplift is highest closest to the glacier margin were the greatest mass loss takes place. The uplift rate is 40 mm per year at Jökulheimar and compared to Höfn in Hornafjörður the uplift rate is 12 mm per year. Rising sea level due to melting glacier and warming climate the crustal uplift to some degree.

As the glaciers continue to retreat, the access for glacier walks become difficult at some location, as well for volunteers of the Iceland Glaciological Society who are measuring the retreat. Increased opportunities may occur for boat tours on glacial lakes, on the other hand. Ice caves in winter are becoming popular tourist attractions. The walls and ceilings of the ice caves are weakened by elevated air temperatures in the spring and they may collapse.

Many animals are affected due to the melting glaciers for example the melting water flows into the soil, impacting vegetation which functions at lower altitudes as food for animals, some of which are prey to other animals, etc.

When the glacier is melting, the heat won’t reflect as much off the earth, and that will have effect on the heat on earth.