Skip to content
Climate change is taking place all over the world due to climate change. We looked at how the changes appears in our countries.

The fact that humans pollute and emit so many greenhouse gases have a huge impact on Norway and the rest of the world. The average temperature in Norway has increased by between 0.5 and 0.6 °C and it is expected that in the next century it will increase 2.3 and 4.6 °C.

The temperatures increase causes the large glaciers to retreat and become smaller. Witch can lead to raising sea levels, that can affect cities and villages near the sea or coast. Other consequences are that there has been a significant increase in the tree line in Norway. The summers are longer, and there is not as much snow as it was for

There are also consequences for the biological diversity. When the climate changes and the temperature increases, some of the animals must changes their lifestyles. For instance, the cuckoo, the cuckoo is a migratory bird and goes to Africa every winter. Since it has been a lot warmer the las few years some of the other birds who earlier travelled to Africa, just travel to places in Europe now. That means the birds come back and start the brood season earlier. The cuckoo needs other birds’ eyrie so they can brood, but when the other birds start early the cuckoo comes too late.

When some species die out and the nature of diversity shrinks, nature will become less robust. A diversity of plants, animals and fungi gives nature a defence against changes because the demise of one species can be replaced by another species, with almost the same characteristics. Such works the nature of diversity as a buffer for all the changes global warming causes.

Climate change has already changed Finnish nature. The winter is warmer and shorter, and the temperature has risen. The summer is longer, but it is raining more often. Climate change also affects animals in Finland, and some have lost their territory for example arctic fox. There will also appear some new species of animals and plants if we can´t stop climate change and that will affect Finnish nature. Climate change will also affect ground water. There will be more ground water in the winter but less in the summer. Floods will also increase. The ice on the lakes is not so strong anymore so you can´t go on the ice like before. 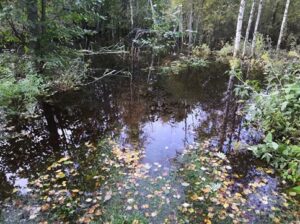 We have noticed that the winter is warmer around us and it snows more often nowadays. Extreme conditions, for example strong winds and storms, have become more common.

The glacier Skálafellsjökull in south-east of Iceland.

What we notice about climate change here around us is we can see that the glaciers are melting, the summers are hotter, it rains much more, and the wind is much stronger than it used to be.

We need to grow more trees to decrease CO2. The photosynthesis is very important, and Iceland is not known for forests, but we can see like on the sand Skeiðarásandur that the forest is growing there which is good because it binds some carbon dioxide.

Manmade greenhouse gases are causing climate changes and the consequences of these changes on the planet are, among other things, melting glaciers, rising sea levels, disturbing ecosystems, and increasing climate extremes.

Also, there will be changes living conditions at sea due to changes in current, acidity and salinity. It is not possible to know with certainty all the consequences of climate change for mankind, but increased greenhouse gas emissions are upsetting the balance that once existed before the industrial revolution.

What can we do to fix the climate changes?

This problem is not only in these three countries: it is in the whole world. The people in the world need to change those things. Even though we change those things other glaciers will continue to melt and the sea level will still rise so that will affect other countries, so everyone needs to think about what they can do to reduce climate change. This discussion has been going on for almost 20 years and nothing has changed so it is time that people and companies need to start thinking about those things.

We must reduce the burning of coal, oil, and gasoline, which increases the concentration of greenhouse gases. Instead, hydropower and geothermal energy need to be harnessed, and electricity generated by wind turbines, tides, and solar cells that absorb sunlight and convert it into electricity.

We need to change our lifestyles, reduce energy consumption by using smaller and more fuel-efficient cars, cycle and walk between places. Goods transport by car and airplane should be avoided. We need to eat more vegetables, recycle more, buy less clothes and use our clothes more than one time and we also need to stop buying new stuff like phones, computers and televisions and we need to use what we have.

We shouldn´t use cars every time we have to go somewhere. We should use more bikes, walk, or use public transport. The main means of mitigating climate change are the abandonment of fossil fuels, the use of sustainable renewable energy efficiency, the electrification of transport, halting deforestation, increasing natural carbon sinks and climate-sustainable food production and consumption. We should also change our lifestyle and not waste so much. Factories should also limit their production so the air doesn´t get so polluted.