Iceland is a volcanic island in the north Atlantic and is famous for its hot springs and dramatic scenery. Iceland is nearly 103.000 km2.  Only a little over 1% of Iceland is fit for growing crops. Most of the landscape consists of big lava fields and glaciers. In Iceland live about 365.000 people and more than half of the population live in and around the capital, Reykjavík.

Iceland is a republic with a directly elected president. The president formally nominates the prime minister. Alþingi is the parliament and supreme authority in Iceland. President of Iceland is Guðni Th. Jóhannesson.

Iceland is not an EU member, but it is a signatory to the EEA Agreement and is also a part of the European Economic Area and a member of NATO.

Fish and fishery products are the country´s main source of income, followed by aluminium and ferrosilicon exports. In recent years, growth has been recorded in sectors such as biotechnology, software and tourism. Because of COVID-19 the tourism has suffered; hotels don’t have as many guests and other companies based on tourism are not earning as much money as usual.

Iceland is known as one of the youngest landmasses on earth to be settled by humans, the oldest parts in Iceland are in the Westfjords and the Eastfjords and are about 16 million years old. Over 1,100 years ago Vikings from Norway discovered Iceland by accident. According to the ancient manuscript Landnámabók the settlement of Iceland began in 874 when the Norwegian chieftain Ingólfur Arnarson became the first permanent settler on the island. With the settlement of Gamli sáttmáli Iceland went under control of Norway 1262 and was under Norwegian and Danish rule until 1918, when Iceland gained independence.

Iceland lies on a plate boundary were the American and European-Asian drift apart, the ridge is a 40.000 km crack in the ocean floor. There are about 30 active volcanoes in Iceland and we can expect an eruption every 5 years. 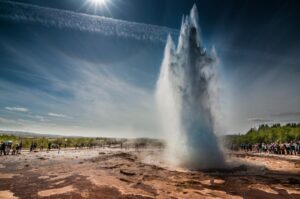 Geysir is one of the main attractions for tourist in Iceland . In 1294 was the first tales of Geysir when an earthquake shook in the southern lowlands of Iceland and it changed the geothermal area in Haukadalur. That’s how the hot springs were formed.

Written by Guðrún and María