Sport is a really big part of life in Iceland, most of Icelandic kids’ train at least one sport when they are younger and 60% of kids in 10th grade (15-year olds) practice at least one sport. Icelanders are probably so healthy worldwide because all these kids get this fun exercise by training these sports. That way they are used to exercising as kids and are there for more likely to do so when they get older.

Parents in Iceland get a grant for kids to play sports, so that is also a big reason why all kids can train a sport, even if the parents don’t have enough money for it.

The following are the sports that are most popular in Iceland: 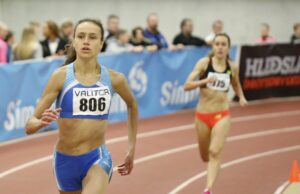 Athletics is highly trained in Iceland, but it can be difficult to train in the winter due to bad weather. One of Iceland’s best athletes is Vala Flosadóttir. Vala trained pole vault and won a bronze medal at the 2000 Sydney Olympics when she jumped 4.5 meters. There are many promising young boys and girls who practice athletics in Iceland for example, there is Aníta Hinriksdóttir, but she is an 800-meter runner and has the Icelandic record as well as winning many junior championships.

Icelandic wrestling (íslensk glíma)
Icelandic wrestling is a very special sport in Iceland. It was the first sport to be played in Iceland, but the sport was founded in Iceland  There are two teams and in each team is a man who manages participants and selects one wrestler for each round sort of like a captain. The wrestling must be over two minutes each round. Two men wrestle until another was thrown into the grass. When all the participants in a team have beaten been, the captain must play.  The game is finished when the captain in either team is beaten. You cannot train wrestling at Höfn. 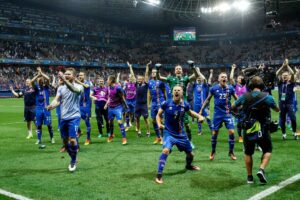 In Iceland, playing football is very popular. It is difficult to play football in Iceland because it can be very cold in the winter. Therefore, many clubs have artificial turf that they can play on and some clubs have built a football house over the turf. The Icelandic men’s national team has been very victorious the last few years. Icelandic men’s national team played in the WC 2018 and EC 2016. At the euros they were knocked out by France when France won 5-2 after knocking England out in the round of sixteen with the biggest achievement in Icelandic football history. Iceland’s home ground is Laugardalsvöllur. Eric Hamrén is Iceland’s national coach and took over after Heimir Hallgrímsson got another job after the world cup. One of Iceland’s best footballer is Gylfi Sigurðsson but he plays for Everton F.C. in the English division.
Sara Björk Gunnarsdóttir is an Icelandic footballer who plays for Lyon in France and is arguably one of the best football player in the world amongst the women. Sara has played in the Icelandic national team since 2007. She is the Icelandic national team captain.

You can play football in our hometown with our club called Sindri UMF and is in the 3rd division but recently hired one of the best coaches in Iceland in hopes of getting to the second or even first league.

Handball
Handball is a popular sport in Iceland, it is not really popular around the world, apart from maybe countries in Scandinavia. Handball was first played outside at the 1939 Olympics but since 1939 handball has been played inside. We have four types of handball; coastal handball, handball, mini handball and street handball. Handball is a popular sport here in Iceland. Iceland has very good national team on handball. Icelandic men’s national team came in second place at the 2008 Olympics. One of Iceland’s best handball players is Aron Pálmarsson who plays for PSG in France and is one of the best Handball players in the world. You can´t train Handball in Höfn.

Basketball
Basketball is a team sport which is played by two five person teams. The goal is to throw the ball into the basket. Basketball has to be played indoors in Iceland. Icelandic men’s national team played at EuroBasket which is one of the biggest competitions in the world. Körfuknatleikssamband Íslands (KKÍ) is the Icelandic basketball union and they were founded on January 29, 1961. The best division in Iceland is the Dominos division. In our hometown you can train basketball with our club called Sindri UMF. The men’s team Sindri UMF is in the first division but it is the division that is under Domino’s division.

Golf is a very popular sport in Iceland, it is played by almost everyone. Golf is an outside sport, and in Iceland you cannot really play Golf in the winter because we have snow, and it gets really cold. For that reason, Golf is not played all year around, it is mostly played from April to October. There are a few places that have indoor golf training facilities that have golfing simulators which are realistic, so people play that to.

Iceland has 65 golf courses, both 18- and 9-hole courses. There are 22 thousand Icelanders that are members of clubs all around Iceland. But there are probably more people that actually play Golf but are not members.

Icelandic equestrian sport
The Icelandic horse is different to horses in every other country, it is smaller than in other countries, but it is strong and fast for being smaller. Icelandic horses have the most gates of all horses in the world, but they have 5. Horse riding is a popular sport in mostly smaller towns, but there are also some in Reykjavík, but not so much.

Gymnastics
Gymnastics is a popular sport in Iceland, the sport is mostly played by girls but there are 75% of those who train the sport that are female. Gymnastics is a sport that trains all the muscles in your body. It takes a toll on your body and, for that reason, the athletes mostly quit because of injuries when they are young and cannot pursue a career in it. Icelandic woman national team has competed at the European Championships and finished in second place. Iceland is good at the team level, with the girls’ team. There are not many athletes playing in the top level in the individual gymnastics, but we are much better in the team gymnastics.

MMA
MMA (mixed martial arts) has increased popular huge in recent years in Iceland. We have one of the largest MMA fitness centres in the whole world called Mjölnir. We also have one of the best MMA fighters in the world, his name is Gunnar Nelson and he is also a coach in Mjölnir. Gunnar is not the only MMA professional fighter in Iceland we also have Sunna Tsunami. Sunna has been living in Iceland since 1985 and has a contract with Invicta where she competes in the featherweight division. MMA has not been very popular in Iceland in recent years but has become more popular with time.

Presentation about sport in Iceland